Monitoring and Detection of Byproduct Crystallization

In-situ monitoring of solid-phase composition during crystallization is often accomplished by Raman spectroscopy, but not all compounds in a system of interest are strongly Raman active. Researchers at Georgia Tech developed an image-based analysis to detect a second undesired solid phase with EasyViewer - before other PAT tools detect the appearance of the solid.  Matthew McDonald describes the system, which involves the reactive crystallization of beta-lactam antibiotics, wherein a byproduct of the enzyme-catalyzed reaction can crystallize within the antibiotic slurry.

The current target of the research is cephalexin, a critical antibiotic, with a byproduct of phenylglycine; however, several other beta-lactam antibiotics exhibit the same behavior, including ampicillin, cefaclor, and cefazolin. The byproduct phenylglycine is present in solution at concentrations on the order of tens of millimoles per liter with a supersaturation less than 1.5; detecting a concentration decrease of about 10 millimolar (indicating initiation of phenylglycine crystallization) within a mixture of several components at >100 millimolar concentration proved difficult with in-situ liquid-phase tools like ATR-FTIR. Phenylglycine shares many functional groups with the desired product and reactants, making its spectroscopic fingerprint similar to the product and reactants. With in-situ Raman spectroscopy, we were unable to detect low loadings of solid phenylglycine in a cephalexin slurry, either because of low Raman activity compared to cephalexin or because of overlap with the complex solution of similar functional groups. Changes in FBRM counts and chord length distributions did not show up at low phenylglycine solids loadings, nor did changes in turbidity. The solution pH exhibited the strongest change upon formation of phenylglycine solids, but pH is not a robust measure of the appearance of phenylglycine as many (often benign) system perturbations give similar pH responses. As crystals of beta-lactam antibiotics are (predominately) needle-shaped and phenylglycine crystals are plate- or column-shaped, the difference in shape, as well as backscatter intensity, can be used to differentiate the two classes of particles. Additionally, phenylglycine crystals are known to partition to air-water interfaces, a fact that can be exploited as the crystals tend to clump on bubble surfaces making them easier to identify in images (Hoeben et al. 2009).

Image analysis enables features and statistics of in-situ images to be extracted and recorded in real time, and the research showed that phenylglycine can be detected from in-situ images. First, objects within the image are identified by edge detection. Then properties of the objects such as size, aspect ratio, pixel intensity, and more, as well as distributions of these properties for every object in each image are used to detect phenylglycine. By tracking these features and statistics, a classifier can be constructed to identify phenylglycine from image data and can be implemented in real-time for monitoring and detection. The statistics can also be recorded as a historical record, which is more feasible than storing the experiment as complete images.

Hoeben, M. A., et al. (2009). "Design of a Counter-Current Interfacial Partitioning Process for the Separation of Ampicillin and Phenylglycine." Industrial & Engineering Chemistry Research 48(16): 7753-7766..

Matthew McDonald is a PhD graduate from Georgia Tech in the School of Chemical and Biomolecular Engineering. His research interests include crystallization, process development and reactive separations. His dissertation, advised by Professors Andreas Bommarius, Martha Grover, and Ronald Rousseau, focused on sustainable production of beta-lactam antibiotics by enzyme-catalyzed reactive crystallization in a continuous process. Matt has 5+ years’ experience monitoring the crystallization of needle-shaped crystals using FBRM and ReactIR. He has coauthored papers regarding various crystallization phenomena, such as growth rate dispersion and growth inhibition, and process design, including reactive crystallization and continuous manufacturing.

Before Georgia Tech, Matt graduated from Princeton University, where he majored in Chemical and Biological Engineering with a certificate in Applications of Computing. His thesis explored creating aerogels from graphene for use as stretchable conductors, winning the department award for innovative undergraduate research. Matt was also Captain of the Men’s Cross Country and Track teams, and his passion for long distance running has followed him to Atlanta. Representing Atlanta Track Club, Matt now competes as a professional marathon runner. He narrowly missed representing Team USA at the Tokyo Olympics, placing tenth at the Olympic Trials after climbing to third place by mile 21 of the race (top three will go to the Olympics). 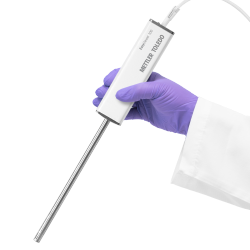 View and Measure Particles In Situ and in Real Time
Probe-based imaging tool that captures high-resolution images of crystals, particles, and droplets as they exist in process.