Domov Knižnica To the Moon and Back - Weighing for NASA

To the Moon and Back - Weighing for NASA 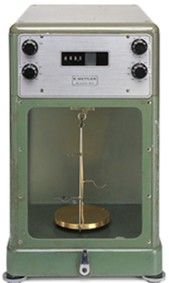 A small step carrying a lot of weight: The 1969 lunar landing. It sent TV viewer ratings rocketing into the stratosphere and drove innumerable companies and universities to extraordinary accomplishments. The objective: To ensure the success of the Apollo II mission. Mettler Instrument Corporation was one of the companies that supported NASA. This collaboration is still alive and well.

"The eagle has landed!" Those are the words Neil Alden Armstrong transmitted back to the space administration on July 20, 1969. Shortly before, he planted the Eagle lunar module in the Mare Tranquillitatis, the "Sea of Tranquility". A long journey for the astronauts of the Apollo II mission - the average distance from the Earth to the moon is about sixty-times around the world, or about 384,401 kilometers. Mission commander Armstrong and Edwin "Buzz" Aldrin move about like feather weights on the powdery surface of earth's orbiter. Instead of the 360 pounds on Earth, their suits weigh only 60 pounds because of Moon's gravity, which is only one-sixth that of the Earth.

Space exploration and Apollo mission
Meanwhile, Michael Collins, the third Apollo II astronaut, orbits the moon in the space ship and shoots the pictures that on the next day are circulating around the world: They show the Eagle lunar module on its return voyage from the lunar surface to the mother ship. Around 400,000 people and 20,000 companies and universities worldwide supported the Apollo program at its height. Among them was Mettler Instrument Corporation of Greifensee near Zurich. They provided balances for precise weighing of food, as Swiss television reported in a TV piece commemorating the 40th anniversary of the lunar landing. With their 10 mg readability, the Mettler balances used by NASA were extraordinary for their times. Along with precision and analytical balances, NASA used also Mettler Instrument Corporation combination analytical instruments. A recording vacuum thermoanalyzer was used, for example, for studying different substances, such as metals under varying temperature and environmental conditions.

Even before the first Apollo flights Mettler balances supported space exploration. In the early sixties, long before Armstrong's words, "That's one small step for a man; one giant leap for mankind" - the Jet Engine Division of General Electric (GE) opened the door to successful lunar exploration. GE received the NASA contract for modifying the fuel cells developed in 1838 of the rocket drives of the spaceship. When doing this GE took advantage of prior knowledge regarding the separation of hydrogen and oxygen from water by applying an electrical current. Combined with a catalyst, these two gases supply electrical energy.In 1969 this energy brought the astronauts to the moon and back. The water produced by this reaction in the fuel cells was further utilized by the life-support system of the spaceship. The key element of the catalyst was "platinum black", a very expensive element. Large quantities of "platinum black" had to be weighed to within 0.1 mg.

Collaboration with NASA
At the time, the only balance that was capable of such precise weighing performance was the B5C1000: a Mettler Instrument Corporation analytical balance with a 1000 g capacity and a readability of 0.1 mg. GE extremely satisfied with the performance of this balance installed the fuel cells after scrupulous testing in the service module of the Apollo spaceship. The voyage to the moon and back could disembark. In 1972 Apollo 17 was the eleventh and to date last so-named flight to the moon. After that, NASA shelved the lunar exploration program for financial reasons. But the NASA collaboration with the precision instrument manufacturer METTLER TOLEDO continues to the present day.

NASA's analytical chemistry division uses the model XS205, an analytical balance, and density measuring instruments in its laboratories. The Kennedy Space Center (KSC) in Florida uses an XP504s in testing materials that are destined for the Aries I launch vehicles. In addition, it measures the water content of foam used in the space shuttle using Karl Fischer DL39X titrators. To date the long voyage to the moon and back is looking for a match. Scientists are searching for ice on the moon using a variety of probes; different specialists are talking about a permanent lunar station. But now that Google Earth has made interactive lunar exploration available, anyone can be an Armstrong or an Aldrin. Even so, their trip to the moon and back remains forever unique.