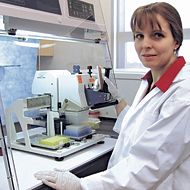 Housed in the Biodiversity Institute at the University of Guelph, in Toronto, the Canadian Centre for DNA Barcoding (CCDB) is an integral part of International Barcode of Life Project. The project is creating a barcode reference database of short standardized gene regions. Its mission: The identification and discovery of five million specimens from more than 500,000 species within five years.

The centre has processed roughly 300,000 animal, plant and fungal samples per year since 2009. Once at the CCDB, samples follow a typical genomics workflow with DNA extraction and PCR amplification. Downstream analysis methods include sequencing DNA barcodes for animals that comprise roughly 650 base pairs of COX gene. Chloroplast genes are used for plants, rbcL and matK.

Speeding up the workflow using Liquidator 96 See the Liquidator 96 in action at CCDB