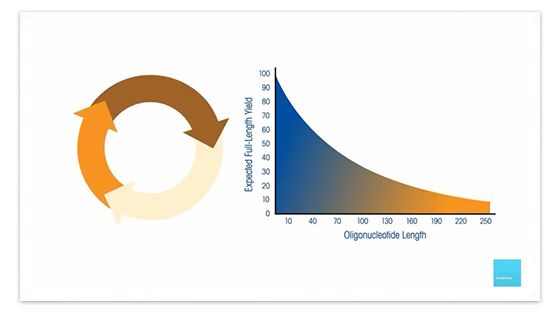 What is Oligonucleotide Synthesis?

Oligonucleotides can be formed either enzymatically through cleavage of larger biomolecules or through targeted chemical synthesis. In the latter case, organonucleotide synthesis is the chemical process by which nucleoside phosphoramidites – a key monomeric element of oligonucleotides – are synthesized. Nucleoside phosphoramidites (also known as nucleosides or amidites) themselves are derivatives of natural or synthetic nucleosides.

Nucleotides, therefore, are compound molecules consisting of a covalently linked nucleoside and a phosphate group. Nucleotides are linked in a specific sequence to form the desired product. Thus, oligonucleotides consist of short segments of nucleic acids that are linked together forming single-chain biological polymers (“-mers”). Since most oligonucleotides (oligos) typically consist of up to 20 linked nucleotides (though more are possible), they can be thought of as small biopharmaceutical molecules.

Much like other pharmaceutically-relevant small molecules, oligonucleotide synthesis requires careful control with respect to temperature, pH, quality of substrates, etc. Because of the typical methods used in oligonucleotide synthesis, the longer and more complicated the nucleotide sequence, the more difficult it is to meet yield, purity and cost objectives. Process Analytical Technologies (PATs) are useful in achieving these goals.

What is an Oligonucleotide?

Oligonucleotides, or oligos, are short single or double stranded segments of nucleic acids that are linked together to form single chain biological polymers. The individual nucleotide bases can be thought of as equivalent to the monomers that make up classical chemical polymers. A nucleotide consists of three parts: a nitrogen-containing base, a sugar molecule with five carbons (these two parts are the nucleoside), and one or more phosphate groups. Alternatively, nucleotides can consist of non-natural or non-canonical bases. Common examples include LNA (locked nucleic acids), Morpholino, and structurally modified bases or backbones.

The complex linking of nucleotides form the biologically-critical RNA and DNA biomolecules. In the case of RNA, which is a single strand biopolymer, the sugar is ribose. In DNA, the double strand molecule contains the sugar deoxyribose. It is the short sequences of deoxyriobonucleic acids and ribonucleic acids that are the building blocks of important oligonucleotides. Specific linkages of these nucleotides create the target biomolecules that are used in biological, medical, forensic and clinical applications.

How Are Oligonucleotides Used?

The most common use of synthetic oligonucleotides is as relatively short probes and primers (up to 30-mer) in a wide variety of applications. This involves synthesizing a nucleotide sequence that is paired or 'reverse-complimentary' to a larger, target DNA or RNA strand (target sequence). As primers, oligos are typically used to initiate enzymatic reactions to e.g. create millions to billions of copies of a short or long target sequence. Well-known examples are the polymerase chain reaction (PCR) or the Sanger sequencing method. Applications for oligo primers include DNA sequencing, gene expression, cloning and molecular diagnostics.

As probes, oligos serve to identify and bind to a specific DNA or RNA target sequence in order to confirm presence of this sequence in a given material. Applications using oligo probes include blotting procedures such as northern blotting (for RNA) or southern blotting (for DNA), as fluorophore-conjugated sequences in microarrays that detect changes in genes expression or used in screening for genetic diseases or to identify specific pathogens (molecular diagnostics).

In therapeutic applications, antisense oligonucleotides (ASO), generally 20 to 30-mer species, take advantage of natural biology and facilitate gene inhibition or gene silencing (destruction) of undesirable or over-active RNA sequences, this in turn blocks expression of certain damaged or overactive proteins which may be causing or facilitating disease. Research on oligonucleotide based therapeutics has intensified tremendously and several drugs have been approved in recent years.

Although not an oligonucleotide by strict definition, DNA- or RNA-based vaccine products, such as mRNA or plasmid or vector-based nucleic acids, of many hundreds or thousands of bases in length, represent the frontlines of evolving synthetic nucleotide technologies.

In concept, DNA or RNA vaccines would dispense with all unnecessary or harmful parts of a pathogenic bacterium or virus. Instead, such a nucleic acid-based vaccine would contain code for just a few parts of the pathogen's DNA or RNA. These DNA or RNA strands instruct the patient's own body to produce individual antigens or fragments of the pathogen, and then promote an immune response to the antigen. With modern computing and in silico modeling, these oligonucleotide vaccine modalities are capable of being created in a matter of days or weeks given an appropriate target sequence to design against. As a platform technology, nucleic acid-based vaccines rely on standard sets of building blocks or raw materials enabling myriad of combinations almost at will. As such, they are also relatively cheap and easy to produce compared to traditional vaccine modalities. However, this is still a maturing paradigm for the biopharmaceutical industry and new challenges are constantly being addressed, some unique to oligo and long nucleic acid products and some shared with other biotherapeutic modalities.

How To Synthesize Oligonucleotides

Oligonucleotide synthesis is the chemical process by which nucleotides are specifically linked to form the desired sequenced product. Continuous solid phase synthesis using a packed-bed column is commonly used for producing oligonucleotides. In some cases, a batch, slurry reaction is employed.

The process of producing the target oligomer sequence takes a number of cycles consisting of specific synthetic steps. In the first step, a 4,4’ dimethoxytrityl protecting group on the solid phase supported nucleotide is removed. Next, a phosphoroamidite monomer is activated and rapidly coupled through the free hydroxyl group on the solid phase bound nucleotide to create a dinucleoside that contains a phosphite triester link. In the third step, the phosphite triester is oxidized. In the final step (of the first cycle), any unreacted supported nucleosides are “capped” via acetylation to prevent unwanted side products forming in the next cycle.

How Long are Oligonucleotides?

Oligo Length and Impact on Yield

The length of an oligonucleotide is defined by the number of nucleotides that make up the sequence. As far as nomenclature, a sequence that is 20 nucleotides long is defined as a “20-mer”. The oligo length is critical to the different applications. For example, short-mer oligos are commonly used in PCR, whereas very long sequences (200 bases or more) are used in demanding applications such as cloning or CRISPR editing. The synthesis of specialized, long-mer oligos is challenging and delivering a pure sequence requires both effective synthesis control and purification methods. On average, most oligos are less than 60-mer in length. Since the way oligos are synthesized requires repetitive reaction cycles that add additional nucleotides, the longer the sequence required, the greater the likelihood of forming unwanted by-products – which may include deletion or truncation sequences.

Different purification methods are used depending on quality, quantity, and cost objectives. For example, salt-free oligos have by-products of the chemical synthesis removed, but sequence failures remain. These desalted oligos are useful from a cost and efficacy perspective for more routine applications, such as PCR. For more demanding applications, reverse phase chromatography removes unwanted sequences from a product, but not as effectively as gel electrophoresis, which delivers a highly purified sequence product, but typically at limited quantities. Especially for clinical concerns, yield retention is an ever-present concern throughout synthesis and downstream processing as well.

Production of Custom Peptide and Oligonucleotide

Classical solid phase chemical synthesis typically involves the use of polymer or specialized glass beads that are not affected by the reaction conditions. These beads may be contained in columns in which reactants, reagents and solvents flow through. The purpose of the beads is to act as a platform on which substrate molecules are covalently bound, and then acted upon by chemical reaction. Protection and deprotection of certain functional groups on the substrate molecule is key to the synthesis and to ensure that the desired product is obtained. The synthesis product is removed by chemically breaking the bond between it and the underlying polymer bead.

Solid phase synthesis is effective at quickly yielding purified product, since impurities and unreacted materials are washed away in the various steps of the synthesis. Furthermore, the entire synthesis is amenable to computer control and automation. Solid phase synthesis is the most common method employed for custom peptide and oligonucleotide production. In the latter case, numerous repetitive cycles are required to sequentially add nucleotides in order to form the target sequence.

Solid-phase oligonucleotide synthesis presents many challenges, including the decrease of yield as chain length increases. Steric hindrance is often hypothesized as a mechanism of poor yield where one or more surface-fixed strands may interfere with each successive elongation of its neighbor.

To address these and other challenges, there are various methods of liquid-phase oligonucleotide synthesis.

Many basic steps of liquid-phase synthesis are analogous to solid-phase synthesis. The principal difference is that synthesis occurs in solution or liquid-phase (i.e. NOT fixed to any surface). As this process still proceeds in cycles, there are several accompanying methods for removal of unreacted reagents while retaining the elongated oligonucleotide product.

Technologies for Monitoring and Control of Oligonucleotide Synthesis

The complex nature of oligonucleotide synthesis could benefit from a higher degree of process observation, understanding of reaction mechanisms and deviations, and actionable controls. Real-time analyses with PAT could minimize or eliminate the need for time-consuming or slow offline analyses.

The authors note that although the protocols for automated solid-phase oligonucleotide synthesis are well established, the chemistry involved remains both challenging and costly. Key risks identified in manufacturing include:

Failure to identify and react to any of these risks can result in complete loss of process. Thus, the use of real-time spectroscopic monitoring coupled with discriminate, quantitative and MSPC modeling based on mid-infrared data was evaluated. ReactIR was found to bring real-time assurance and control to the synthesis process and enable improved automated synthesis of oligonucleotides. In particular, the sensitivity, informational depth, broad scope and empirical accessibility of this approach was seen to allow ready application to a large number of the key manufacturing challenges associated with these compounds, not the least of which is online sequence and purity confirmation.

The authors note that Antisense Oligonucleotide (ASO) sequence is a critical quality attribute and must be confirmed as part of the release identification test. However, confirming the identity of the full-length product (FLP) can be challenging as there are many possible closely related structures. Related structures may originate from failed chemistry, unintended coupling to the solid phase substrate, raw material preparation, dosing and reagent identification errors. Any one of these events could lead to an oligonucleotide polymer of incorrect sequence or other unacceptable quality attributes.

ReactIR was used to model and discriminate phosphoramidites and solvents in flow identification and synthesis. Spectral differentiation between modified phosphoramidites enabled confident real-time process verification, providing the ability to catch an error in the dispensing of materials in real time, before causing sequence failures. ReactIR made opportunities available for corrective actions otherwise not possible.

The real-time monitoring capabilities of in-situ FTIR and Raman Spectroscopy for chemistry carried out under flow conditions is well proven, and is applicable in key steps of oligonucleotide synthesis. 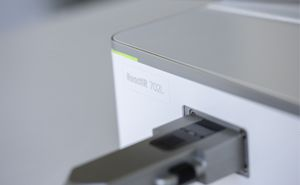 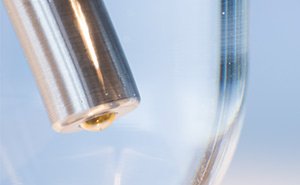 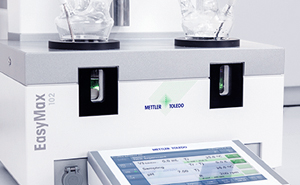