Part 1 (Steps 1 to 3) of this TA TIP on method development appears in the February 2008 American Lab issue. This article is the second and final part in the series.

Step 4: Choosing the temperature program
The two main aspects that have to be considered are the 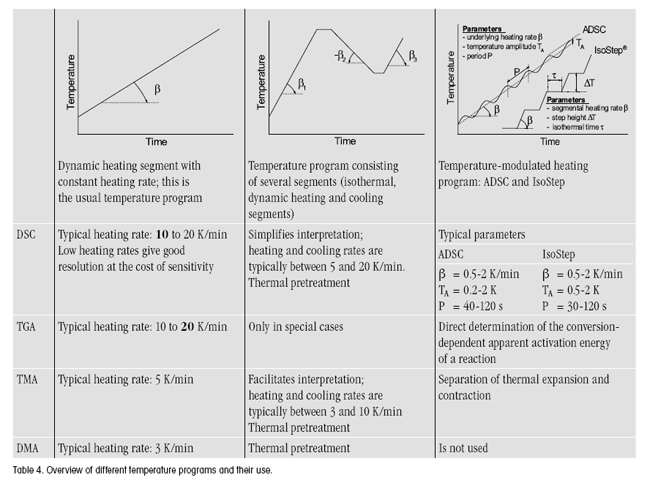 Step 5: Choosing the atmosphere
With DSC and TGA in particular, different atmospheric conditions allow different types of information to be obtained. This is illustrated in Figure 4, which describes the decomposition of coal as an example. The upper curve was measured in an air atmosphere, the lower curve under nitrogen (up to 900 °C) and then air (above 900 °C). In air, the combustion profile of the sample is of interest, that is, the temperature at which the coal begins to burn, and how the combustion process proceeds. If the measurement is first performed in an inert atmosphere and then finally under air, the main questions have to do with the composition of the coal, that is, the content of volatile compounds (moisture, adsorbed gases), whether inorganic compounds are present, and the carbon content.

In DSC, the atmosphere within the crucible plays an important role. For example, in an open crucible, one observes the slow evaporation of solvents and moisture. This process gives rise to broad endothermic peaks that sometimes overlap with other interesting effects such as glass transitions and polymorphic transitions.

If the crucible is sealed with a crucible lid that has been pierced with a small hole, a so-called self-generated atmosphere is created and the evaporation process is delayed almost to the boiling point of the liquid. Above the boiling point, the liquid evaporates rapidly from the crucible. METTLER TOLEDO supplies lids with a hole-diameter of 50 μm for this type of measurement. Finally, in a hermetically sealed crucible, the boiling point can be exceeded. The crucible is then under pressure. This can lead to initial deformation of the crucible and ultimately, on further temperature increase, to bursting (see Figure 5). Endothermic evaporation can be completely suppressed by using medium pressure crucibles.

Step 6: Examining the sample after measurement
One should make a habit of weighing samples before and after an experiment (even with TMA and DMA measurements). Small mass changes indicate that evaporation or initial decomposition processes have taken place. This usually has an effect on the measurement curves (not only DSC, but also TMA and DMA curves). These effects are often only weak and may hardly be noticeable so that the gravimetric information is very important.

A further aid to interpretation is a visual examination of the sample after the experiment. Points to check are

Answers to such questions can lead to a better interpretation and understanding of the effects observed in the measurement curves.

Step 7: Evaluation
To obtain quantitative results, the measured curves have to be properly evaluated. Often, several different methods (involving the choice of baseline, drawing of tangents, etc) are available to calculate numerical results from the curves. This in turn may lead to different measurement results being obtained. For example, the glass transition temperature can be determined from DSC curves according to ASTM and DIN methods, and according to other procedures (Richardson, bisector of tangents). To meaningfully compare measurement results, it is important to evaluate measurement curves in exactly the same way each time and to state the method used (baseline type, tangent type) to obtain the results.

Step 8: Validation
Once steps 1 to 7 have been defined, the final task is to design an experimental plan for validation, that is, to plan a certain number of experiments. This includes specifying the number of repeat measurements (for repeatability) that must be performed, as well as defining the order in which sample and reference sample measurements and blank curves must be measured. This also includes giving details about the statistical methods to be used for further analysis of experimental series. 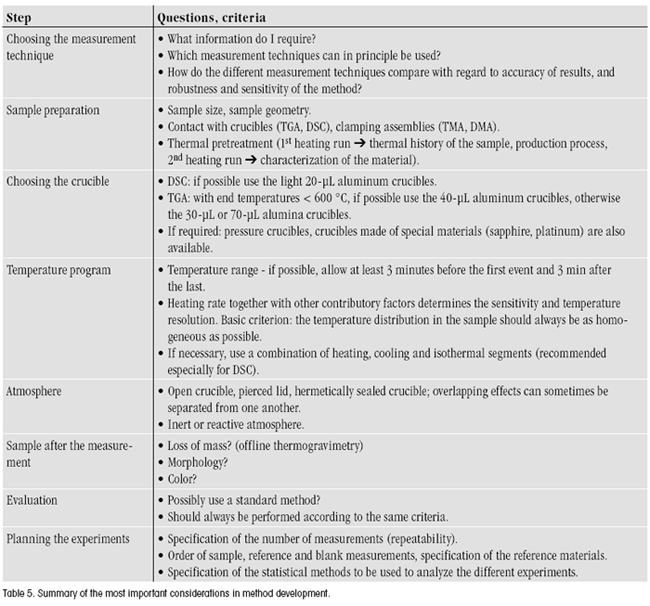