Determination of the fiber content of composite materials by thermogravimetry

Plastics are frequently filled or reinforced with very different types of material in order to improve their mechanical and thermal properties. Organic fillers and reinforcing materials (e.g. wood flour) increase the toughness of a plastic. The addition of fibers can result in a major increase in stiffness and structural strength. Besides natural organic fibers such as jute and sisal, synthetic inorganic fibers (e.g. glass and carbon fibers) and organic fibers such as aramid are widely used for reinforcement purposes. Aramid fibers consist of poly-p-phenylene terephthalamide and are remarkable because of their high tensile strength and their relatively high decomposition temperature of about 550 °C.

Fiberglass-reinforced thermoplastics are being increasingly used for technical products: they can be processed by injection molding or extrusion and exhibit excellent mechanical properties. This allows them to be used in very diverse fields (car manufacturing, precision machines, electrical engineering etc.). Some examples of products reinforced with aramid fibers are high pressure flexible hoses, belts and bulletproof jackets. The quality assurance of such composite materials consists primarily of checking the desired fiber content. This is very easily done using thermogravimetry, as will be shown in the following two examples. Thermogravimetry (TG) or thermogravimetric analysis (TGA) measures the mass of a sample that is heated at a constant rate (usually linear) in a controlled atmosphere. The examples described here deal with the loss of mass resulting from the pyrolytic decomposition of the plastics under nitrogen.

The mineral constituents of mortar mixtures can be divided into two main groups - "reactive binders" and "inert fillers". By mineral binders, we usually mean cement, e.g. Portland cement or aluminous (high- alumina) cement, anhydrite and/or hemi- hydrate (calcium sulfate) that hydrate when mixed with water. The hydrates form a solid matrix that binds the mortar together. Quartz or carbonate-rich sand and/ or their finely crushed powder are used as fillers. Other possible mortar constituents are latent hydraulic binders, glasses, lightweight fillers and a large number of organic additives such as cellulose ethers and redispersible powders.

Fresh mortar is made by adding water and mixing well. The particular working consistency of the mortar depends on the application. When used as an adhesive for wall tiles, the shear strength and viscosity should be on the high side. For self-leveling flooring, the mass may segregate to certain degree. The mortar must remain homogeneous, i.e. the coarse mineral constituents should not settle, and the water with the dissolved and dispersed fine components should not rise to the surface too much.

This article describes how the segregation behavior of freshly made mortar was quantitatively analyzed using TGA/SDTA. A simple tile adhesive recipe was used as an example.

A large number of polymers are able to form crystalline structures in which parts of the macromolecules are orientated parallel to one another. Unlike low molecular weight substances, the degree of crystallinity that can be achieved by polymers is much lower than 100 percent and depends on the molecular structure. Besides crystallites, amorphous regions can also be formed in these materials. In practice one distinguishes between two kinds of amorphous regions in partially crystalline polymers based on the different types of molecular mobility possible. The mobile amorphous regions are between the crystallites. They also determine the step height of the glass transition. At the surface of the crystallites there are rigid amorphous regions that exhibit an amorphous structure but despite this do not take part in the glass transition because of their reduced mobility (see UserCom 11). The temperature at which crystallization occurs, how rapidly it takes place and the degree of crystallinity achieved, depend on the molecular structure of the sample.

The following acronyms are used in this article:

The properties of the copolymers of ethylene and higher α-olefines (1-butene, 1-hexene, 1-octene, 4-methyl-pentene, etc.) are closely related to the molar mass distribution (MMD) and the short chain branching distribution (SCBD) within the macromolecule.

The MMD and the type and content of monomers (or branching) can be determined by Size Exclusion Chromatography (SEC) and Nuclear Magnetic Resonance (NMR). The determination of the SCBD requires the use of fractionation techniques. For instance, the monomer distribution along the molecular chains can be determined by Temperature Rising Elution Fractionation (TREF). This technique fractionates the heterogeneous polyethylene (PE) by stepwise crystallization in solution onto an inert support. The support temperature follows the crystallization temperatures of the different molecular structures of the PE chains. The method involves dissolving the polymer in a suitable solvent at high temperature at 130 °C to 140 °C. The dilute polymer solution is then cooled slowly to room temperature. Afterward the temperature is increased in steps. Fractions are thereby formed that can then be analyzed with the standard methods used for the determination of the characteristics of molecular structures. Although TREF has been successfully applied, the main disadvantages of this fractionation technique are the relatively high costs involved and the time needed to perform an experiment. Several research groups have therefore tried to develop simpler and more rapid methods for the analysis of polyethylenes and α-olefine-copolymers using Differential Scanning Calorimetry, DSC, even though the results of these methods are not as accurate as those from TREF analysis.

This study compares two DSC methods for estimating the SCBD of copolymers following appropriate thermal treatment. The first method is known as the Stepwise Isothermal Segregation Technique (SIST). This involves the stepwise fractionation of the sample through crystallization by cooling the sample in a series of isothermal steps from the melt analogous to the TREF technique. SIST is mainly used for polyethylenes (PE). Up until now no significant results have been obtained with polypropylenes (PP). The second method is based on a superposition of self-nucleation and annealing cycles and is known as Successive Self-nucleation / Annealing (SSA). SSA is a more recent method than SIST and is also used for the characterization of polyethylenes. In this paper we compare conventional DSC melting analysis with the SIST and SSA methods for the characterization of three polymers: a homopolyethylene and two ethylene /1-hexene copolymers with different proportions of butyl groups. 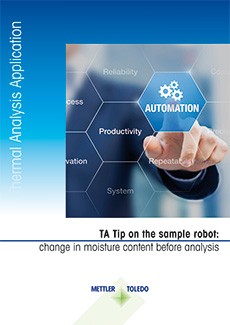 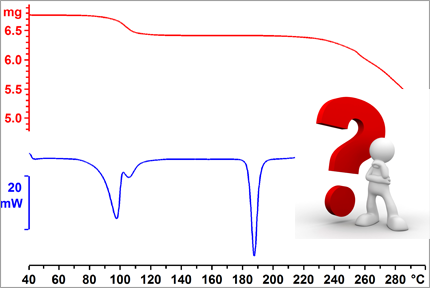 TGA Curve Interpretation – TA e-Training Registration
In this e-Training course, you will learn how to interpret individual measurements and get valuable tips on how to obtain additional information using...
Thermal Analysis UserCom 50 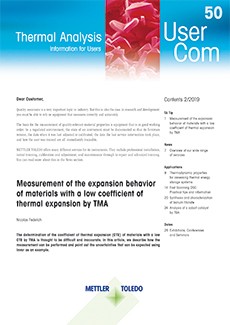 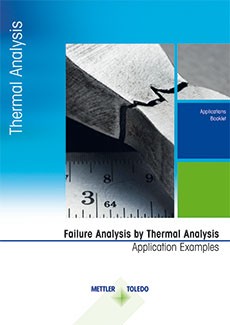 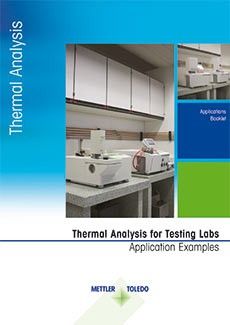