Advantages of the Melting Point Apparatus 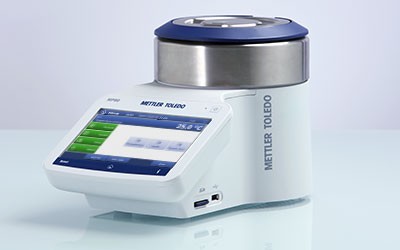 METTLER TOLEDO's Excellence Melting Point Systems offer many benefits to optimize and simplify your melting point analysis so that you complete measurements faster for higher throughput. Watch the video and learn more about our outstanding melting point instruments.

With simple operating routines and an intuitive touchscreen user interface, measurements can be performed quickly and easily. Just one click is needed to start the analysis, and the instrument does the rest, so you can attend to other important tasks while the measurement is being performed.

Melting Point and Much More

Observing how a sample behaves at different temperatures can help characterize its physical properties. With the integrated video view measurements can be observed in real-time or replayed to verify your results.

What is a digital melting point apparatus?

A digital melting point instrument uses a furnace and video camera. The change in light transmission in relation to furnace temperature is measured for melting point detection. This melting point measurement is done digitally, reducing operator influence considerably. Up to 6 samples can be measured simultaneously with an accuracy of down to 0.2 °C using short heating and cooling times. With its compact size, the METTLER TOLEDO melting point meter fits well on every lab bench.

How does a digital melting point apparatus work?

A METTLER TOLEDO melting point system is represented in the schematic diagram below.

This system is a combination of a furnace and a video camera.
Melting point is determined by heating the sample. The furnace is used to control the temperature during an analysis. Temperature control and recording is performed by a digital platinum sensor.
The sample sits inside a glass capillary which is inserted into the furnace. During heating, when melting occurs, light transmission through the sample changes: When the material is solid and opaque, less light is transmitted through the substance. When a material is liquid and more transparent, more light is transmitted. This change in light transmission can easily be determined with a video camera, making this a reliable way to detect the melting point of a substance for a fully automatic melting point determination.
All results, measurement data and video files are stored on the melting point device and a lab report can be generated fully automatically.

Which samples can be measured with a digital melting point apparatus?

The determination of the melting point can be performed for powdered crystalline samples. The sample being investigated must be fully dry, homogeneous and in powdered form. Moist samples must be dried first. Coarse crystalline sample and non-homogeneous samples need to be finely ground in a mortar.

What does a melting point accessory box consist of?

For sample preparation, a dry powdery substance is ground in a mortar and filled into the capillaries, which are then inserted into the furnace. The melting point accessories box by METTLER TOLEDO contains everything needed for accurate and reproducible sample preparation.

The melting point accessory box is part of the standard delivery of the MP90 and is a highly recommended optional accessory for MP55, MP70 and MP80 instruments.

How do you calibrate and adjust a digital melting point apparatus?

If we want to make sure that the melting point analyzer is providing the correct results, we need to verify its measurement accuracy. As it is not possible to measure the sample temperature directly using a certified thermometer, the temperature accuracy is checked using reference substances, ideally with certified temperature values. Thus, we can compare nominal values including tolerances with actual measured values.

If calibration fails, which means if the measured temperature values do not match the range of the certified nominal values of the respective reference substances, the instrument needs to be adjusted.

How much substance do I have to fill in the capillary? How can I check the filling height?

The key to good results is careful and exact sample preparation. Prepare your samples so that the amount of substance is the same across all capillaries. Slight differences in the amounts could cause deviations in the measured melting point temperatures.

Check the capillary fill height using the lines marked on the melting point sample preparation tool. For accurate measurements, the optimum fill height of 3 mm should be observed.

The sample preparation tool offers many possibilities for checking the fill height of your substance. See Fig. 1 for an example of estimating various fill heights. For best results, it is important that the melted substance covers the holes for transmission light detection.

Does the METTLER TOLEDO melting point apparatus support compliance with to 21 CFR Part 11?

The Excellence Melting Point apparatus can be connected to METTLER TOLEDO's LabX laboratory PC software for analytical instruments and balances. This robust software powers the melting point system with automated data handling, high process security and full SOP guidance.
LabX enables full integration of analytical data into other laboratory systems such as LIMS and ERP, which can help your lab comply with regulations and be ready for audit. LabX fully supports you with software validation and compliance including 21CFR part 11, EU GMP annex 11 and ISO 17025.

What are the pharmacopeia requirements for melting point determination?

Pharmacopeia requirements for melting point determination at a glance include:

Use capillaries with outer diameters ranging from 1.3–1.8 mm and wall thicknesses from 0.1– 0.2 mm. Apply a constant heating rate of 1°C/min. If not otherwise stated, the temperature is recorded point C when no solid substance is left (which corresponds to the clear point). Pharmacopeias such as the United States Pharmacopeia (USP) require the determination of the melting range, where points A (corresponds to collapse point) and C are used for temperature determination. The recorded temperature represents the temperature of the heating stand, which can be an oil bath or a metal block, in which the thermocouple is positioned.

In detail, the METTLER TOLEDO MP55 and MP80 Melting Point Systems offer the possibility to perform the following applications:

Boiling Point Measurement:
The MP80 acts as an automatic boiling point apparatus according to the following measurement principle: To determine the boiling point, which is the temperature at which a phase transition from liquid to gas occurs, approximately 100 µL of sample is pipetted into a glass tube. A smaller boiling point capillary is then inserted into the filled tube to prevent superheating of the liquid, which would induce boiling retardation and give rise to inaccurate readings. The sample is then inserted into the boiling point instrument, and the method is started. The temperature rises, and gas bubbles are formed within the liquid and escape to the surface. These ascending bubbles reflect the light of the built-in light source and are detected individually. The frequency of the bubbles is measured and is used as the basis for boiling point determination. Ambient pressure is measured with a built-in calibrated barometer, and compensation to sea-level pressure is automatically calculated and applied to the results.

Cloud Point Measurement:
The MP80 acts as an automatic cloud point apparatus according to the following measurement principle: The cloud point of a solution corresponds with the temperature above which a sample becomes turbid. Cloud point determination is typically performed with a 1% weight dilution of the substance of interest in water. Approximately 100 µL of sample is pipetted into a glass tube and inserted into the cloud point tester. The solution of interest is transparent at the beginning of the experiment, and when the cloud point is reached, the solution becomes turbid. This turbidity is monitored via transmitted light detection – the higher the temperature above the cloud point, the more turbid the solution, and thus less light is transmitted through the solution. Automatic video camera detection of the decrease in transmitted light intensity is the key to obtaining repeatable and reliable cloud point results.