Heat capacity at constant pressure, Cp, is a quantity that characterizes the amount of heat, ΔQ, required to change the sample temperature by ΔT.

With the help of Thermal Analysis you can measure cp in the temperature range from -150 to 1600 °C.

Each TA method has its advantages and disadvantages. In general:

You will get more details about the different methods in the handbook, Thermal Analysis in Practice:

The standard technique is DSC. If there is weight loss in the interesting temperature range, TGA has an advantage because:

For more information about the products please have a look at:

In this application, a temperature modulated technique called TOPEM® is used to measure the sensible specific heat capacity curve during the curing of a two-component epoxy system.

The black curve is the total heat-flow curve and is almost identical to a conventional DSC curve. This curve exhibits a glass transition at about −20 °C. The main effect is the peak due to the curing reaction at about 90 °C. In contrast, the blue curve shows the change of the sensible specific heat capacity with higher resolution and sensitivity. The glass transition of the initially unreacted mixture causes the step change in the cp curve at about −20 °C. 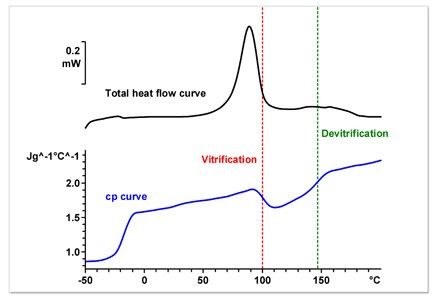 Further valuable TA information and the latest news are available at: