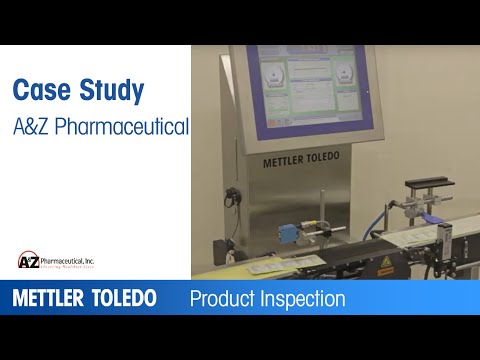 A&Z Pharmaceutical has been a leading developer and manufacturer of premium nutritional supplements for more than 20 years. Their success is reflected in their renowned flagship brand, a vitamin D and calcium supplement called D-Cal®.

To protect the brand’s integrity using a more automated process, they replaced offline checkweighing with a new inline IM3100 checkweigher from METTLER TOLEDO in 2016. This unusual dual-lane, chute-fed checkweigher helped the company increase throughput and reduce labour while ensuring the quality of their product.

“We selected the IM3100 for our pouch filling line because of its impressive accuracy at high speeds despite vibrations on the line,” said Jose Rios, R&D Technician at A&Z Pharmaceutical. “We’re actually maintaining an accuracy of +/- 25 to 30 mg, which is better than what METTLER TOLEDO quoted, since we’re running a little bit slower than the rated max capacity of 120 packages per minute.”

As the only chute-fed, intermittent motion checkweigher on the market, the IM3100 works differently than other checkweighers. Packages slide down each of the two chutes and stop at a gate. Here, they are statically weighed with an advanced electromagnetic force restoration (EMFR) weigh cell, which is more accurate than common strain gauge load cells. Packages that are the correct weight continue down the chute to a platform, where they are hand-packed into cases. Underand overweight packages are automatically diverted to a reject bin via a pivoting flap.

“The gravity-fed IM3100 easily handles the vibrations caused by our pouching machine and has a small footprint to fit our space requirements. This allowed us to install it inline,” said Mark Appledorf, Plant Engineerat A&Z. “Because this checkweigher uses a static weighing method, it has better accuracy than most dynamic systems. The downside of static weighing is its slower speed, but the two-lane configuration on our system achieves the throughput that we need.”

On this line, a vertical-form-fill-seal (VFFS) machine packages granular D-Cal into strips of ten pouches, which are then cut in half to two strips of five pouches that each measure 2.5 x 7.5 inches and weighing 7.4 grams. A pick-and-place system then feeds the strips to the checkweigher with the wide-edge leading.

“Before we installed this checkweigher, we did all of our weighing off-line. It took two people three days to do 100 percent inspection, which was very time and labour intensive,” explained Appledorf. “Now we’ve improved our production efficiencies by inspecting the product inline immediately after pouching. We’re better able to meet our shipping schedules, and we’ve redirected the two people who had been handling the off-line checkweigher to elsewhere in the plant.”