Stuck Particle Correction Improves Consistent and Reliable Measurement - ParticleTrack can distinguish between particles stuck on the probe window and those moving in the process. These stuck particles can be removed from the data ensuring a consistent and reliable measurement for more experiments.

Wider Dynamic Range To Detect Critical Process Events - ParticleTrack measures changes in particle count to accurately eliminate concentration-related artifacts from the data and ensure improved sensitivity to changes in the particle system at higher concentrations.  This allows critical process events to be detected that may previously have gone unobserved. 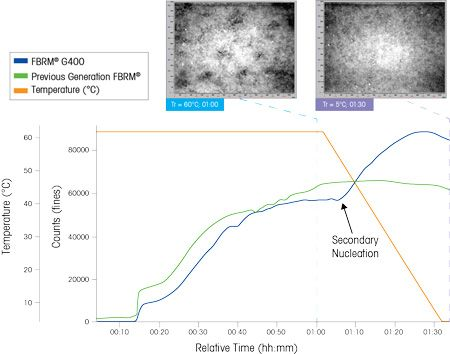 Figure 3: Example of ParticleTrack identifying a secondary nucleation event at the end of a process while at high concentration. 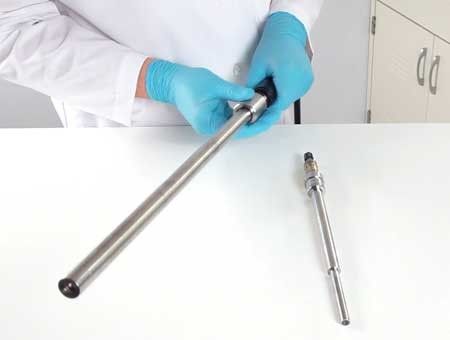 Figure 4: Interchangeable probe configurations for the same instrument are shown.

Interchangeable Probes Decrease Costs and Increase Range of Scales - Lab-based ParticleTrack instruments are now available with different sized probes that can be easily changed by the user.  This improves serviceability and increases the range of scales where the same instrument may be used at an overall lower cost.

Two Measurements Acquired Simultaneously To Eliminate Need for Prior System Information or Trial Experimentation - ParticleTrack now collects two datasets simultaneously that are optimized for different types of particle systems. This eliminates the need for any a prior system information or trial experimentation to determine the optimal measurement method.

Improved Instrument to Instrument Repeatability - ParticleTrack technology was developed to ensure different lab and production instruments now measure much more closely, allowing changes in scale of measurement to be decoupled from differences in the probe used to measure them. 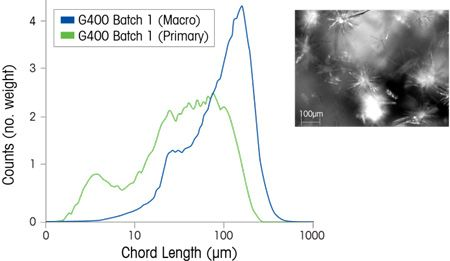 "The mean square-weighted chord lengths reported from older generation FBRM for flocculated minerals are typically under 400 mm, and yet the naked eye can see much larger aggregates being formed in thickener feedwells. The G400 probe consistently measures larger chord lengths, and this is seen as a significant advantage"

"Process analytical technologies (PATs) have played an important role in process development and optimization throughout the pharmaceutical industry. Recent new PATs, including in-process video microscopy (PVM), a new generation of focused-beam reflectance measurement (FBRM), miniature process IR spectroscopy, and a flow IR sensor, have been evaluated, demonstrated, and utilized in the process development of many drug substances. First, PVM has filled a technical gap by providing the capability to study morphology for particle engineering by visualizing particles in real time without compromising the integrity of sample. Second, the new FBRM G series has closed gaps associated with the old S series with respect to probe fouling, bearing reliability, data analysis, and software integration. Third, a miniaturized process IR analyzer has brought forth the benefits of increased robustness, enhanced performance, improved usability, and ease of use, especially at scale-up".

Positioning a ParticleTrack or ParticleView Probe (pdf)
ParticleTrack probes use Focused Beam Reflectance Measurement (FBRM) technology to track the rate and degree of change to particles and particle struc...