Advanced 360° In-line Serialization.Serialization using 6 image sensors to capture a 360° view of any round container such as bottles or vials. The compact design is optimized to fit over existing conveyors for minimal disruption to production lines.

Serialization for any Round Container

Serialize labels on bottles, vials and cans through a full 360° view of packaging with minimal disruption to existing production efficiencies.

Supports a Range of Round Package Sizes

Accommodates round packages such as bottles, cans, or vials sized from 10 mm to 110 mm using either a fixed focal lens or liquid lens.

Choose from our fixed focal lens or liquid lens 360° Inspection Head to read modules as small as 0.2 mm per code. 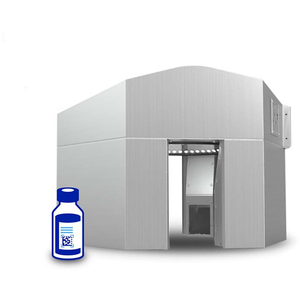 Choose the electrical enclosure, cabinet and HMI needed for your application. Fit the 360° Inspection Head over existing lines, or use a standalone frame to accommodate any space requirements.

Use an additional smart camera to read inkjet printed information such as serialized helper codes, or expiration dates on caps or lids. Can detect both black printed and UV ink.

Helps you meet global regulatory standards, such as GMP (Good Manufacturing Practices), US FDA 21 CFR Part 11 practices or others unique to your region.

A global network of service experts provide fast remote and on-site support. Our comprehensive service offer allows you to achieve regulatory compliance, high performance, and maximum uptime throughout the life cycle of your product inspection equipment.

T63 Datasheet
T63 Integrated 360 Serialization for any round container – Achieve a full 360° view of packaging to serialize labels on bottles, vials and cans.

Get Your Quote
T63 Integrated 360 Serialization
Please describe your project.