Aggregation Solutions for the Traceability of Products – Free Download

This white paper looks at the aggregation process, which defines the track and trace data relationship between the parent and child. Aggregation makes tracing products through each step of the supply chain much simpler. This in turn means that should one of those individual products show up elsewhere, it has been either stolen or counterfeited.

Different methods of tracking products exist. Aggregating codes together allows for faster and easier tracking - each package no longer needs to be scanned at each stop as long as the aggregated code is scanned. This also increases process security, as larger containers can remain sealed until they reach their ultimate destination.

The white paper focuses on the following subjects:

Counterfeit Goods Are on the Rise

Counterfeiting and illicit trade are a growing problem. Customs authorities across the EU seized an estimated five million more counterfeit items in 2015 compared to the previous year, according to figures released by the European Commission in September 2016. More than 40 million products were detained by EU customs in 2015, with an estimated value of nearly US$650 million1.

Cigarettes remain the top category (27%) of goods detained, while food and beverages, toiletries, medicines, toys and household electrical goods account jointly for 25.8% of the total¹.

A report by the Organization for Economic Co-operation and Development (OECD) reaffirms a number of trends that have been evident for more than a decade: almost all brands are being counterfeited, and counterfeit or pirated products originate from economies across all continents, with China remaining the largest producing economy. It also indicates counterfeiters are improving their logistics networks, manipulating transit routes, exploiting governance gaps and taking advantage of the growth in online shopping². 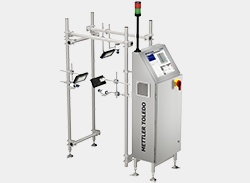 Vision Inspection Systems
Mettler Toledo is an expert provider of vision inspection solutions, with a great deal of experience in this field across a wide range of clients and...

Understanding Food Label Regulations
This white paper details all relevant labeling information a manufacturer needs to know to minimize the threat of both product recalls and causing the...

Principles of Due Diligence - Free PDF Download
This white paper explains the concept and principles of due diligence especially its importance in terms of providing a basis for a legal defence.

Medical Device Labeling - Understanding the Regulations
A white paper outlining the key requirements for medical device labeling in the US, EU and China.