In-process tools can provide a deeper understanding and allow for faster characterization and development of crystallization processes. Effective implementation of in-process tools allows crystallization processes to be monitored in real-time with no need for sampling. Sampling can be time consuming and non-representative - especially for crystallization systems where samples can change due to nucleation, growth, agglomeration and/or breakage once removed from the crystallization vessel. In-process tools may also be implemented at a range of scales making it possible to compare crystallization experiments performed in the laboratory with batches run in the pilot plant or at the full productions scale. This is especially important for anti-solvent systems where changes in mixing conditions between scales can make effective scale-up and subsequent optimization of manufacturing processes difficult.

Undersaturated solutions of benzoic acid in aqueous ethanol solutions were prepared and held at a constant temperature of 25ºC.  Benzoic acid is an organic compound, poorly soluble in water but soluble in ethanol with no known polymorphs cited in the literature. Water was added at a fixed rate of 0.1 gs-1 and 0.2 gs-1 respectively and the resulting crystallization was monitored using in-situ process analytical tools. Lasentec® FBRM® and PVM® were used to track the crystalline solid phase and ReactIRTM (ATR-FTIR spectroscopy) was used to monitor the liquid phase i.e. the supersaturation The experiments were performed in a LabMax® vessel allowing the temperature and anti-solvent addition rate to be programmed and controlled automatically. 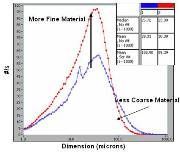 This application note highlights the high quality information that may be gathered in real time for the characterization of crystallization systems. In this case the impact of addition rate on particle size and morphology was studied and the mechanism for the difference was confirmed; elevated supersaturation at higher addition rates. The impact of other process parameters including operating temperature, mixing regime, antisolvent used, addition location, initial solute concentration and seeding protocol may all be studied in a similar fashion for a comprehensive development of a robust crystallization process. By utilizing in-process tools at the small scale, crystallization development is facilitated and scale-up can be expedited.

Acknowledgements
METTLER TOLEDO would like to thank Dr. Brian Glennon and the School of Chemical and Bioprocess Engineering, University College Dublin, Ireland.

Products and Solutions
Applications
Is this information helpful?