4 Reasons Why Your Tank Scale Could Be Wrong

Do you rely on tank scales when filling, batching or tracking inventory? If so, accuracy limitations can diminish product quality, leading to material losses or even recalls. Learn how this new tank-design tool promotes more accurate tank weighing. 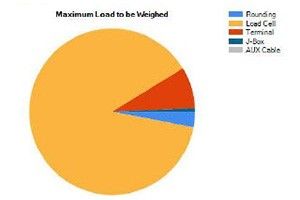 When Weighing Provides the Best Accuracy

In the chemical industry, accurate materials measurement in processes, such as dosing or mixing for a batch, defines your product quality. Weighing of storage tanks or large silos offers many advantages.

In general, weighing is the best method when:

Be that as it may, the accuracy of your tank scale is influenced not only by the weighing sensor but by the proper selection of all components and the tank design itself. Let's look at the four major reasons variances and errors can occur in your tank weighing process.

The weighing sensor has the largest impact on system accuracy. Traditional analog load cells achieve resolutions of approximately 3000-5000 divisions, which might not be sufficient at the full capacity range of the tank scale.

Electrical components, such as junction boxes and cables, contribute to measurement errors in analog scales. Analog signal quality can be significantly influenced by environmental factors, such as electromagnetic interference or temperature changes.

Stiff piping or deflecting foundations can degrade the performance of even the best weighing system. In such cases, the displayed weight on the tank scale deviates from the real tank weight.

Over time, system performance degrades or components even fail. In traditional analog systems, it is very difficult to identify faulty load cells. Regular inspection and calibration makes sure that these issues are detected in time and correction measures can be applied.

During a consultation we calculate the impact of all components of the weighing system including load cells, indicators and junction boxes on the performance of your scale and summarize the results in a standardized report. This free consultation and report supports optimization of your tank design in an early phase by:

Get in touch with your METTLER TOLEDO sales representative for a full consultation on your next tank scale installation.