Prevent Samples from Binding to the Pipette Tip

Sensitive experiments, like those dealing with DNA or proteins, might yield incorrect results if the sample adheres to the pipette tip. New low-retention tips minimize sample interaction with the plastic tips, guaranteeing extra accuracy.

METTLER TOLEDO’s Rainin Low-Retention (LR) tips are commonly used in laboratories when it comes to the pipetting of ‘sticky’ and viscous liquids. These could be buffers containing glycerol, or proteins, DNA and many others. The special surface of Rainin LR tips eliminates adhesion and prevents samples from interacting with the polypropylene surface of the tip. This repellency optimizes fluid movement within the tip and helps to limit the residual volume of fluid left in the tip after dispensing, improving pipetting accuracy and reproducibility.

Diabetic retinopathy is an eye disorder caused by microvascular complications of diabetes. In this disorder, the retina of the patient is damaged over time and in some cases the patient loses their vision. Specifically, eighty percent of patients who are diabetic for 10 years or more are affected by diabetic retinopathy; however, vigilant ophthalmological screening and treatment can reduce the number of new cases by 90 %. If it were possible to diagnose patients in the early stage of diabetic retinopathy, classified as nonproliferative diabetic neuropathy (NPDR), which has mild or no ophthalmological symptoms, then the number of new cases could potentially be reduced even further.

For some diseases, biomarker screening methods have the power to enhance the timeliness of detection, and thus, treatment. In biomarker screening, a patient's blood or other bodily fluid sample is screened for the concentration of proteins, metabolites or other molecules, and the concentrations of these species are compared to healthy individuals. If the concentration of the molecular species of interest is out of the normal range, medical professionals can make an accurate diagnosis. If more than one biomarker is monitored, then the confidence of diagnosis increases.

In a paper published in the Journal of Proteome Research, Kim et al. explored the use of a mass spectrometry detection method called multiple reaction monitoring (MRM) to quantify protein biomarkers for patients at risk for NPDR. They collected plasma samples from unafflicted patients and from patients in the three stages of NPDR – mild, moderate, and severe. After denaturing and proteolytically fragmenting plasma proteins, an exogenous standard peptide was added as an internal standard for quantification. The peptides were separated and analyzed using LC-MS . Using this technique, the authors found 28 different proteins that had different concentrations in the plasma of unafflicted patients, mild NPDR patients, and moderate NPDR patients. After analyzing these 28 potential biomarker proteins, Kim et al. developed two 4-biomarker panels that exhibited great discriminatory power for mild NPDR, mild+moderate NPDR, and unafflicted patients.

The experiments in this paper required the normalization of mass spectrometry signals from plasma samples against an exogenously added standard peptide. Because the plasma needed to be handled prior to the addition of the standard peptide, there was the potential of losing biomarker proteins due to their nonspecific adsorption onto plastic surfaces.

As this could skew the ratio of biomarker proteins to the exogenously added standard, the results of the paper depended on using low-retention plasticware to minimize protein adsorption. For pipetting plasticware, the team used Rainin LR tips in order to prevent peptides binding to the tip and thus affecting the test results.

METTLER TOLEDO has recently launched a new generation of Rainin Low-Retention tips. These offer our best performance yet, and are available in a wider range of tip geometries, sizes and packaging options.

Take a closer look at our LR tips 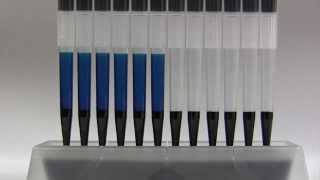 To see for yourself, and for a limited time only, you can now order a free rack of the new Rainin Low-Retention (LR) tips. Register now to get a free sample package!