Optimization of a Crystallization Process at Roche

Martin Betschart presents how Roche Pharmaceuticals optimizes a crystallization process.  Details of the optimization of the cooling rate and of the seed particle size distribution are included.

This webinar includes practical examples and case studies on developing a robust crystallization process using Process Analytical Technology (PAT).  Join the over 500 researchers who have already viewed this presentation.

The transfer of a crystallization process to a different Roche manufacturing site led to the production of an Active Pharmaceutical Ingredient (API) with a different particle size distribution than expected. For the correct identification of the root causes of process deviations, the crystallization process was monitored with Process Analytical Technology (PAT). A calibration model was developed and used to measure the concentration of API in solution. From dissolution experiments, the temperature-dependent API solubility was found and described as a polynomial function of the temperature. The difference between the measured API concentration and the temperature-dependent solubility was used to predict the absolute supersaturation. Within the first cooling crystallization experiment, a secondary nucleation event was identified as the cause of the deviation. The secondary nucleation of an undesired polymorphic form could be monitored by FBRM (increase in fines) and ATR-FTIR spectroscopy (rapid decrease in API concentration). Furthermore, we could show a correlation between the secondary nucleation and the shift of an infrared signal that is caused by the carbonyl bond of the API. The set-up was then used to support the development of a robust crystallization process.

Who Should View This Webinar?
Chemists and Chemical Engineers interested in the optimization of a crystallization process in the Pharmaceutical, Chemical, and Consumer Products Industries as well as in Academia.

Guest Presenter
Martin Betschart earned his Master’s degree from the Zurich University of Applied Sciences. During his Master thesis, he optimized an enantioselective catalyzed reaction in a microreactor by using online IR-spectroscopy and polarimetry. In 2012, he started as a PAT specialist at F.Hoffmann-La Roche in Basel, where he supported the crystallization and chemical development for enhancing process understanding and process control. In several crystallization projects, he implemented process analytical technologies to monitor the API concentration via IR- and UV-spectroscopy and the polymorphic transformation via Raman-spectroscopy.

Crystallization Image Analysis
Presented by Prof. Zoltan Nagy of Purdue University, this talk provides an overview of recent advances of applications for in situ imaging and image a... 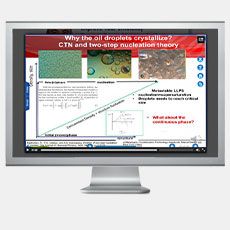 This presentation details how using data from in situ particle vision and measurement tools can be used to determine particle size and shape trends re...
Crystallization Scale-up Strategy Development 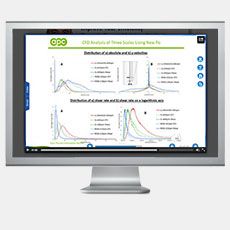 During this webinar, two case studies are presented to illustrate the application of tools and strategies that were utilized to understand and manage...
Wet Milling Impact on Particle Size 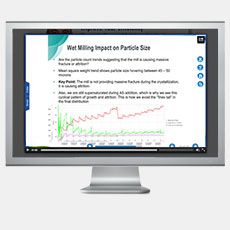 This presentation details the development, understanding, and scale-up of an aseptic crystallization, which utilizes a novel wet milling during anti-s...
Related Products