The use of Fourier Transform Infrared (FTIR) spectroscopy to understand the effect of catalyst, substrate, and carbenoid precursor on the rate and efficiencies of rhodium catalyzed reactions is discussed. Optimized systems with a substrate to catalyst loading of greater than 1,000,000 were developed.
Huw M. L. Davies - Professor of Chemistry, Emory University
37 minutes
English 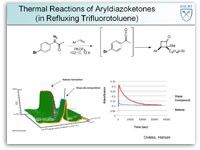 The presentation - Impact of FTIR Studies on the Understanding of Asymmetric Rhodium Catalyzed Carbenoid Reactions - has three sections reviewing:

Professor Davies shows the potential of donor/acceptor carbenoids as versatile intermediates in organic synthesis, the importance of FTIR, and how ReactIR™ is a useful tool to optimize these reactions. ReactIR™ helped to discover new reactions as well as developing safer ways to work with these diazole compounds for carbenoid precursors.

Professor Davies has published over 200 articles and holds 10 patents. He currently serves on the editorial boards of a number of journals, including the Editorial Board of Organic Reactions and Organic Syntheses, the Editorial Advisory Board of Chemical Society Reviews, and the Editorial Board of Chirality. Professor Davies is actively involved in the chemical community, having served as the Executive Officer of the 2003 National Organic Symposium, the 2005 Program Chair of the Gordon Conference on Heterocyclic Compounds, and the 2005 Chair of the Organic Division of the American Chemical Society. He has received a number of awards, including the State University of New York Chancellor’s Awards for Excellence in Teaching, Research Recognition and Scholarship and Creative Activities, a Japanese Society Fellowship for the Promotion of Science, and an American Chemical Society Cope Scholar Award. In 2007, he became a Fellow of the Royal Society of Chemistry and 2009 he became a Fellow of the American Chemical Society.