Researchers have recently developed a more accurate method of identifying certain lysosomal storage diseases in newborns. The Rainin Liquidator 96 speeds up sample preparation and ensures high accuracy in the diagnosis of these genetic diseases. 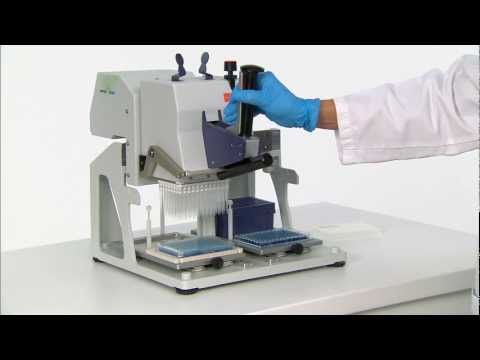 Lysosomal storage diseases (LSD) are a family of disorders with mild to severely debilitating  symptoms. These diseases are usually caused by the mutation of proteins that are involved in lysosomal processing.  The  severity  of  symptoms depends  on  which  proteins  are  mutated, how  they  are mutated,  different  factors controlling gene expression and environmental factors. There is often a delay in the diagnosis and treatment of LSDs due to their variable presentation and non-specific symptoms.

In  a paper submitted to The  Journal  of  Pediatrics, entitled “Identification of Infants at Risk for Developing  Fabry, Pompe  or Mucopolysaccharidosis-I  from  Newborn  Blood  Spots by Tandem Mass Spectrometry” by Scott et  al.,  the  authors  developed  a  method that  uses  mass  spectrometry  to  screen for  many  LSD  in  parallel.  They  first took  dried  blood spots  from  newborns, in  which many  lysosomal  enzymes  retain activity, and  re-suspended  them  in a buffer  containing  the appropriate  enzyme  substrates  for  the  enzymes whose defects cause the diseases. Using  tandem  mass  spectrometry,  the team  could  distinguish  whether  a  given infant was deficient in any particular enzyme  activity.  Depending  on  the  enzyme  activity  in  a  given  blood spot,  the authors analyzed  the gene  sequences of the  newborns  to  confirm  whether  low enzyme  activity measured  in  the  assay correlated  with  mutations  in  the  same enzyme.  Scott  et  al.  found  that  their method increased the likelihood for the detection  of  Fabry,  Pompe  and  mucopolysaccharidosis-I over that of standard clinical diagnosis.

Liquidator 96 – the instrument of choice

The experiments required  the  analysis of more  than  100,000  blood spots.  Such a  high  number  of  samples  required  an accurate  and  systematic  sample  preparation  process.  Small  ‘punches’  of each blood spot were placed in a 96-well plate.  Using  METTLER  TOLEDO’s  Liquidator 96,  the  researchers were able  to add  enzymatic  reaction  solution,  reaction quench and product extraction solvents to the plate rapidly and accurately. These samples  were  then  used  for  tandem mass spectrometry.

The  Liquidator 96  is  a  highly  accurate and  precise  benchtop  96-well  pipetting instrument  that  does  not  require  any electricity  for  operation. With  96-channels pipetting at the same time, the Liquidator 96  can  significantly  accelerate experimental workflows  beyond what  is possible  with  single  and  multichannel pipettes.  In  time-critical  applications, like enzymatic reactions, it is especially important that the reaction is started in all  96-wells  at  the  same  time.  Liquidator  carries out  this  task  simply and accurately  and  avoids  the  risk  of  skipped rows,  a  common  scenario  with  multichannel pipetting in 96-well plates.