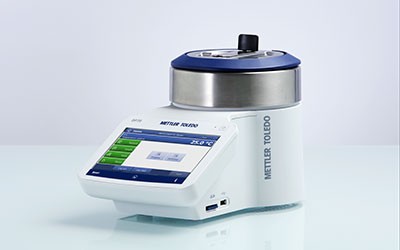 METTLER TOLEDO's Excellence Dropping Point Systems offer many ways to optimize and simplify your dropping and softening point analysis so that you complete measurements faster for higher throughput. Watch the video and learn more about our outstanding dropping point instruments.

With the visual camera observation and digital image analysis, highly accurate dropping and softening point temperatures are obtained fully automatically. High-resolution videos of the measurement can conveniently be replayed.

With the Excellence Dropping Point Systems, full compliance with national and international standards is ensured so you don't need to worry your measurements will pass audit. Standard compliant cups and measurement methods provide comparable results.

With simple operating routines and an intuitive touchscreen user interface, measurements can be performed quickly and easily. Just one click is needed to start the analysis, and the instrument does the rest.

Instrument settings can be personalized with shortcuts and the selected operator language. The user management system allows different levels of access to be defined, protecting critical data.

Consult the detailed list of relevant national and international standards and norms for dropping and softening point determination. Read more

In addition to preventive maintenance procedures, Installation Qualification and Operating Qualification packages are available, ensuring compliance with quality systems such as GMP and GLP. Read more

What is a digital dropping point apparatus?

A digital melting dropping instrument uses a furnace and video camera to automatically detect the drop point and softening point event. This measurement is done digitally, reducing operator influence considerably. Two samples can be measured simultaneously with a temperature accuracy of down to 0.2 °C and short heating and cooling times. The layout of the furnace and the video image analysis respectively allow two samples to be measured simultaneously. METTLER TOLEDO Excellence Dropping Point Systems DP70 and DP90 work both as automated dropping point apparatuses and automated softening point apparatuses.

How does a digital dropping point apparatus work?

A METTLER TOLEDO dropping point system is represented in the schematic diagram below.

This system is a combination of a furnace and a video camera.

Dropping point and softening point is determined by heating the sample. The furnace is used to control the temperature during an analysis. Temperature control and recording is ensured by a digital platinum sensor.

In the Dropping Point Excellence Systems from METTLER TOLEDO, a white balanced LED light is shining on the test assembly, which consists of the cup and holder inside the furnace. The reflection image is recorded by a video camera.

For the automated dropping point determination, the entire drop point test is video-recorded and image analysis is used to detect the first drop that escapes the sample cup when it passes through a virtual white rectangle located underneath the cup orifice. While detecting this, the furnace temperature is measured and recorded at a resolution of 0.1 °C.

For the automated softening point determination, the leading edge of the softened sample is marked with a stepping line in the video. Once the stepping line has passed a virtual line that is located 19 mm below the cup orifice the corresponding furnace temperature is measured and recorded at a resolution of 0.1 °C.

What are common samples to be tested with dropping point systems?

How do I measure dropping point correctly at sub-ambient temperatures?

Edible oils, fats and organic solvents can be solidified and measured at low temperatures. Substances often need to be cooled or frozen for a sufficient amount of time prior to the dropping point measurement. The METTLER TOLEDO Excellence Dropping Point System DP90 performs dropping point measurements down to -20 °C. Place the separate DP90 measurement cell, the furnace and the optical detection system, in a refrigerator or a freezer till the required temperature is attained.